Black Oath comes from Italy and they play high quality doom metal, cursed musick for cursed souls. Their last album “To Below and Beyond” came out in October 2015 and later this year, in November, the band will visit our country for the first time, attending Doom Over Bucharest II Festival. I took the opportunity and had a very interesting discussion with A.TH (vocals/bass), who was kind to accept this interview. Enjoy!!

1. Hails, A Th, thank you very much for accepting this interview for scrollsofdarmoth. Please introduce Black Oath to the Romanian public. Whom did you swear the Black Oath to?

Hail to you. Black Oath is a Rock band born around 2006,I was involved into a Black Metal project at that time and during rehearsal session I used to play different music with the drummer.The thing became bigger and Black Oath took possession of all my energies. Once I found a line up we recorded the first selftitled MCd and then we got attention from Horror Recs who released 2 albums and various ep ( I HATE RECS. From Sweden made Cd versions).Nowadays the line up is completely different,no more fake personalities will infect my band,and the new album sounds better than anything we did before.

2. You’ve been a part of this scene since 2006, when it all started with the occult themes. Now, 10 years later, everything is occult, from shows, outfits, beliefs to artwork and lyrics. Everybody is trying to copy everybody and only few bands are of great worth. Why is that happening? Wouldn’t it be easier for a band just to follow its own calling/path instead on jumping onto this occult bandwagon? Why did you choose to play (traditional) doom metal and not occult black metal, for example?

This is the new trend and I am glad I started right before everybody turned into Occultists,Satanists or astrologists ..I don’t consider BLACK OATH as traditional doom metal. Candlemass is, not us. I am inspired by totally different stuff and I describe the band as Cursed Rock Musick. Mercyful Fate, Maiden, DeathSS, BlackHole and Mortuary Drape are the main influences together with dark prog music. I played Black Metal for years before Black Oath, now I find my perfect equilibrium into this kind of sound..which is darker and sicker.The attitude never changed,the feeling of possession are still the same.

3. The self titled MLP and the next 3 albums have been released on cd and vinyl by different labels (Magister Dixit, Horror Records, I Hate Records, Terror From Hell Records). Why is that? Is Black Oath a difficult band to work with or you just did not find THE perfect label for you until now?

The perfect label doesn’t exist. We worked well ,more or less with all these labels and still keep good relation with the guys behind them…and yes,maybe we are not the easiest band to work with.

4. The “Black Oath” MLP and “The Third Aeon” are a bit rough in sound compared to what was released after them, but nevertheless they are very much enjoyable to this day and contain some powerful songs like “Obsessed By Moonlight”, “The Hanged Witch”, “Death as Liberation” or “The Black Oath”. Are you still proud of those releases, do you play some old tracks live?

We improved a lot through the years ,I am a better vocalist (not a good one still),we all are better musicians. We have a total different way to work and I am glad the band took this way. To those who complain and blame us to be too melodic, FUCK OFF. We still play old songs on stage They are extremely powerful and the atmosphere they create with the new ones make our gigs very extreme and well equilibrated. I am proud of all I did with the band but of course my point of view is different nowadays. I could never write another ST or “Third Aeon“, and there is no reason to do it ..not again!

5. Black Oath comes form a country which has quite a strong doom scene. Bands like Abysmal Grief, Black Capricorn, Caronte, Epitaph, Hands of Orlac, just to name a few, are well known in this milieu. Where does Black Oath fit in this scene? Do you have allies among these bands or you are a separate entity, lurking in the shadows?

We are good friends with almost all of them,but we keep our path separated.We support them in all ways as possible but we are BLACK OATH,another band, another story.I always tried to keep my attentions outside Italian scene as I think it could be a prison for those who want to walk the edge. I really cannot understand these who even sings in Italian language! That’s so crap . They’ll be buried here without glory.

6. After “Ov Qliphoth and Darkness”, you had a small line up change. P.V (bass) left the band and was replaced by B.R. This change reflected in you taking the bass duties, along with doing the vocals. Do you feel more comfortable in this position? Is this the strongest line-up BO ever had?

Mh, you are a little confused. B.R. always been part of the band since “Third Aeon” era. He was our session live guitarist and now officially in the band. Since (luckily) PV left, I took bass by myself and we found Gabriel on lead guitar. This is the best line up we could have . I am a real bassist and Gabriel is brilliant on guitar. Those who have seen our recent shows can confirm it.

7. Last year you released your 4th opus, “To Below and Beyond” which I think is your best album so far. It looks like a concept album, very dark and melancholic, with long songs, but not in a boring way. The music is very heavy metal inspired, from the riffs to the guitar solos. How did you come up with this piece of (black) art? 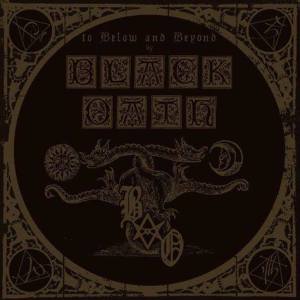 Thank you. We are very proud of it as we really worked our fingers to the bone to make it an hell of an album.Every single melody,arrangement or vocal line took 100% of our time and devotion. Guitars are perfect the way they are and anything is at its right place. I cannot avoid to mention the great guitar solos inspired by La Roque and performed by Ghiulz from Italian legends BULLDOZER.

8. Between and after “The Third Aeon” you have released two 7” Eps, “Portrait of the Dead” and “Cursed Omen”. For both releases, you have recorded two cover versions of Alice Cooper (“Second Coming”) and Black Sabbath (“Electric Funeral”). Was this some sort of tribute to honor those two artists who released 2 groundbreaking albums around the same time (“Paranoid” in 1970 and “Love it To Death” in 1971) ?

Let me tell you we recorded those eps at the same time as we recorded first MCD and first album. “Portrait Of The Dead” are songs saved from the ST recordings and the same for “Cursed Omen” ,which are songs saved from 3rd Aeon . We always record more tracks and ..who knows, they could be usefull in the future. Anyway, we payed our tribute to those artists. Alice Cooper is one of my all time favorite moherfucker ever ! I love all his albums. And Black Sabbath, well they are Black Sabbath.

9. Your lyrics deal with occult themes, witches, alchemy, you know, normal stuff. Where do you get your inspiration from when writing (or composing) for new songs? Grimoires, visons, or rituals practiced in damp, murky cellars?

It is part of myself..of ourselves. There is no need to invent idiot stories about our lyrics or music. It is the mirror of our souls. I am interested into occultism by many years.. I love witchcraft and DEATH in all his ways. There is a morbid fascination for it. Some of my lyrics are poetry, pure dedications to the world beyond.

10. Italy, like Romania, is a country rich in superstitions, especially in the country side. It really amazes me how stupid and narrow minded many people can be when it comes to superstitions and folklore. Why do you think people living in this century are still afraid of omens, wrath of god and other simple things that can be easily explained?

You have vampires we have witches and devils.It is very popular,especially in the south of Italy, to have stories about possession, dead monks, spirits or whatever. It is part of our culture. I like it even if a cannot believe for example, that cats are dangerous if they cross your road. But spiritism and witchery is well alive here..and spiritual seances.. very interesting stuff too..

11. From the gift of god to the art of the devil. Does everything humans touch turn to Evil, instead of gold? Do you see the human race as an alchemical process that at some point went terribly wrong?

Man.. there is nothing more for me to say. You just explained the concept of the album.

12. In November you’ll play at Doom Over Bucharest II. How does a usual Black Oath concert look like? Is it a ritual, a ceremony, or just a show where music plays the main part? What should the Romanian audience expect from you and what are your expectations in regards to this show? As far as I know, this will be your first time playing in Eastern Europe.

It will be our first time in the east, yes. We are very excited about it and be sure people won’t be disappointed. I don’t like to call our shows as “rituals” .. that’s just another trendy word. We will crush the audience as one of the most outrageous extreme band out there. Be sure you won’t fall asleep with our “doom”.. We will curse you all and let you feel the channeling between life and death.

13. From a music collector to a musician: Do you collect music? I imagine being in a band has its advantages when it comes to collecting valuable items, haha. What is your most prized item that you have in your collection (vinyl, tape, cd)? What do you think of this vinyl/tape revival?

I have more than 2000 records at my place. Not into Guinness indeed but still a good number. I got tons of demo tapes coming from the 80’ies and 90’ies. But my real collection is about the biggest band ever. IRON MAIDEN. I got 2 copies of the “Soundhouse Tapes” and various LP, Tapes, Bootlegs, T Shirts and …toys! It doesn’t sound so evil to say but.. IRON MAIDEN is above all. This “revival” is something good for real collectors. There are many Records Expo and I can find rare stuff even for good prices..sometimes.

Thank you very much for this interview, it was a real pleasure to feature Black Oath in scrollsofdarmoth.
The last words belong to you. Cheers!

I thank you. It is such a pleasure to make our first step into Romanian land,and I think this is the very first interview for your country. See you there on November. Bring your crucifix.

All the pictures are the property of Black Oath.