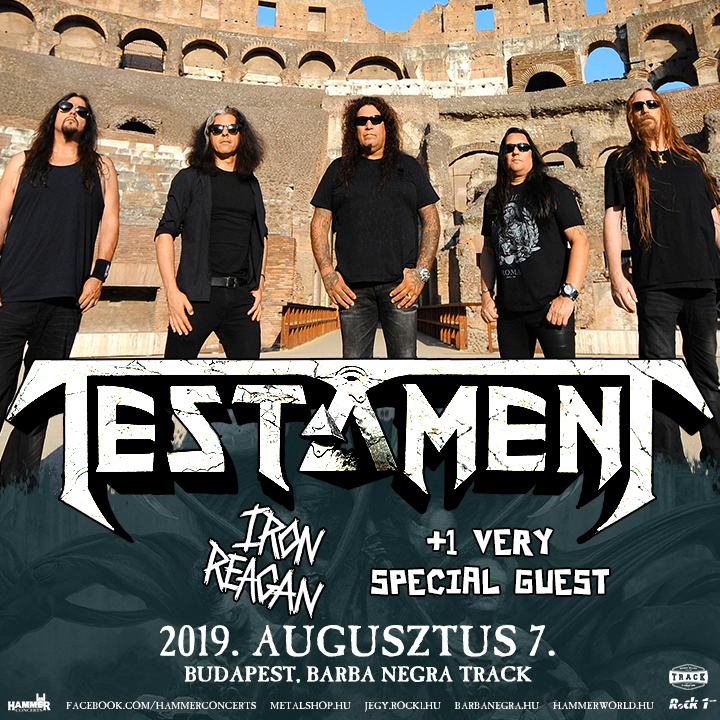 I first saw Testament live 16 years ago at Sziget Fesztival, but I cannot recall too much of their performance considering the fact that their show took place right after Slayer destroyed the main stage, when they performed the famous Reign in Blood in full.
16 more years had to pass for me to be able to witness Testament in a proper, headliner show and that happened yesterday, at Barba Negra Track in Budapest, as part of their Summer 2019 European Tour. The band stopped in Budapest after playing all summer at famous festivals, like Hellfest, Wacken, Graspop etc, so the opportunity to see them in a smaller environment was definitely not to be missed.

I arrived at the venue somewhat early so I had to wait for almost an hour and a half in a scorching heat before the doors were opened, but that only brought my enthusiasm to higher degrees. I knew the set list the band was supposed to perform during this tour and also watched some live videos or full shows from the past performances, so I was already imagining how the night would be.
Another reason for this excitement was the band’s line-up, which is the best line-up a Testament fan can ever dream of. With three of the original members (Skolnick, Billy and Peterson) and with another two legendary musicians on the rhythmic section (DiGiorgio and Hoglan), the band’s performance could not have been anything but amazing. And last night, my expectations were not only fulfilled, but exceeded.

As opening acts two bands have been selected for heat up the audience, Virginia’s Iron Reagan and the Hungarian old school legend Moby Dick.
At 18.10 sharp, the 5 maniacs from Iron Reagan started to rip the stage with their crossover thrash metal, heavily influenced by DRI, Municipal Waste, Power Trip and other similar bands. If the similarity with Municipal Waste is obvious, this is only because both Tony Foresta (vocals) and Phil Hall (bass) share duties in that group as well.

I was never a fan of crossover/thrash metal, so this band did not move at all but I really admired the way they handled the warm-up band position. Full of energy and speed, they took the scene by force sand, at one moment, I even caught myself tapping my foot along with the drumbeats.
Tony Foresta showed his front man skills as he had an almost permanent dialogue with the audience, encouraging the mosh pit and making lots of jokes. That is why crossover was never my cup of tea, but considering what was to come later, it made worth the wait.

After Iron Reagan finished their set, the stage was prepared for the local heroes Moby Dick and I could not help noticing that more and more people gathered in front of the stage to greet them properly.
The band was formed in 1980 and soon began to be really appreciated in the underground, even though it took it 10 years to release the 1st full length, Ugass Kutya.
I admit that I never paid too much attention to Moby Dick during the years, but what I heard and saw last night impressed me.
With a new album under their belt, “Terápia”, released earlier this year, Moby Dick chose a very dynamic and energetic set list to which the audience reacted with a lot of enthusiasm.

An hour passed and Moby Dick’s show ended, so the preparations for the main attraction of the evening started on the stage. At 20.30 sharp, after a short intro, Testament took the stage with Brotherhood of the Snake and Pale King, the first two tracks of their latest studio album released 3 years ago.
What struck me from the very beginning was the vivacity and the shape of all the band members, it was really amazing to watch these guys in their 5o’s play with such a force and passion.

Apart from 2 more songs from a relatively “recent” album (The Formation of Damnation and More Than Meets the Eye), last night’s set list was a trip down on the memory lane of thrash metal.
Compared to the other set lists they played during the Summer 2019 Tour, Testament rewarded its enthusiastic Hungarian fans with an extended playlist (15 tracks in total), mostly based on old songs, some of which have been rarely played (e.g. Low, The Preacher)
Encouraged by the reaction of a very crazy crowd, the band chained classic after classic, from Over the Wall, to Into the Pit and Disciples of the Watch, going through Practice What You Preach, D.N.R., Electric Crown etc.

Chuck Billy proved once again why he is one of the best thrash metal singers, as his voice sounded almost perfect, even when he used the death metal grunts. He played the air guitar on his mike continuously, head banged and threw guitar picks in the audience with a big smile on his face. For me it seems that despite his age (57 last June), time did not leave ugly marks on him, and his vocal skills got better and better (the same thing I noticed with Tom Araya).
Alex Skolnick was in top shape, doing what he does best – using his guitar to create amazing solos or frenzied riffs. Steve DiGiorgio was absolutely amazing with this fretless bass guitar and, when not headbanging, he also backed Chuck Billy up with some harsh, death metal like vocals.

But the real engine of this thrash metal apparatus was the Atomic Clock himself, this drumming machine that is Gene Hoglan. He almost destroyed the drum kit at some point and his double bass pedals were pumping in my heart. It is a real pleasure to watch this guy play the drums in such a natural way, shifting from slower parts to heavy and aggressive ones in the blink of an eye (e.g. The Formation of Damnation). His role in Testament suits him really well and he shows that especially live, when he speeds up the tempo of the tracks, making them more aggressive than on the records.

For me the last night’s show proved again that Testament was and still is one the most underrated and powerful forces in thrash metal, despite some people who tried to keep it somewhere in the background. Just go and see them on stage and you will know what I am talking about. This kind of musicianship is quite a rare gem these days and, as Slayer already proved it, these bands will not be around for long so take your chance before it’s too late. For me, the future does not sound too promising.